11 Days from Fes to Marrakech via Merzouga 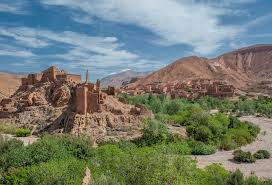 Checking and arrangement of your luggage at the Hotel/ Riad

Visit the new part of town, Finally after dinner we stay overnight in your Imperial hotel/Riad.

An entire day sightseeing in Fes, the oldest  Imperial Cities, founded in 792 A.D. Visit the medieval Medina, the Karaouiyne Mosque, whose central aisle is embellished with elaborate floral and Kufic script carved into the plaster and the color fully tiled Nejjarine Fountain.  don’t miss the fascinating Islamic universities  including the Abou Anania and the Attarine. Dinner and overnight at Your Riad / Hotel in Fes Old City.

11 Days from Fes to Marrakech starts  After an early breakfast,will take you to discover the wonders of  Meknes city, famous for its 16 miles of protective wall, on a sightseeing tour of the Moulay Ismail Mosque and the former royal stables and granaries. After Meknes we drive to the ancient Roman ruins of Volubilis where  you will  explore the 2000-years-old ruins. After lunch in Moulay Idriss, one of the holiest villages in Morocco, will  continue to Chefchaouane to explore one of the most beautiful cities in Morocco, one of the stunning villages in the feet of Rif mountains; chefchaouen medina had a Spanish-style square surrounded by many funky arts and crafts stores, roof-top restaurants and coffee-house.

Today you will have a complete private tour of Chefchaoune. The souk is like a movie set with Narrow streets full of the most amazing range of colors, artisans. You Will also have a private tour of the Kasba and the place of Aotahamam.

Today you journey to Morocco ‘s capital, Rabat. This busy political centre has a mix of the old and new – wide, tree-lined boulevards in the new town lead to the narrow bustling alleys of the old medina. You have the day to explore – visit the Tour Hassan and the Mausoleum of Mohammed V, the Kasbah Oudaias, dominating the estuary entrance and used to defend the city against pirates, the Chellah, a 13 th century necropolis that also encloses the remains of the ancient Roman City of Sala Colonia. In the evening you might like to relax in a boulevard café and sip mint tea while watching the nightly promenade.

Day 06:  Rabat to Casablanca and Marrakesh

After the breakfast Leaving Rabat and going to Marrakesh via Casablanca-is Morocco’s largest city and economic heart,  you’ll Accompany to visit the Hassan II mosque, one of the biggest mosques in the world, After Casablanca we drive to the most dramatic cities in Morocco,   Marrakesh-After Transfer to your Riad you’ll Accompany to see the amazing spectacle of the Jemaa el Fna square at night. The carnival spectacle as the large square that occurs every night and the tradition-was protected by Unesco, Every day is different and exchange all of snake charmers, acrobats, storytellers and musicians with herbal doctors, selling food and henna artists.

Today you will have a complete private tour of Marrakech. The souk is like a movie set with exotic streets full of the most amazing range of colors, sights, smells and sounds, where artisans gather in separate streets as the silver street, city and shoe metal working street. You Will also have a private tour of the Palais Bahia Who was built as a replica of the Alhambra Palace in Granada and if time allows Majorelle Gardens an enchanting site in the heart of the city.

After breakfast we leave Marrakesh early, we drive through the Atlas Mountains (200 kmthrough the mountains of the High Atlas, TiziNTicha).

We stop at Ouarzazate (the capital of cinema). After lunch we cross the Rose Valley and the 1000 kasbahs route. We arrive at Dades Gorges aroundraessun. We spend the night in Dades Gorges.

11 Days from Fes to Marrakech starts  After breakfast, we visit the valley and the Todra Gorge, and we continue to Rissani with its ksours 18th century 350 (Kasbahs,Ksours), an almost impenetrable warren of alleys; then continue on the ruins of Sijilmassa 7th.
In the afternoon, went to the dunes of Merzouga desert by a luxury four wheels, stop for mint tea with the nomads. Continue the journey with a camel ride to enjoy the sunset.
A dinner with local entertainment and night in the Sahara luxury Camp.

We wake you up half an hour before sunrise to see magical lights and the sunrise. After you have a shower and breakfast, We ride camels back to the car and we drive to Fes from Merzouga via Rissani, Erfoud, ZizValley and the Middle Atlas mountains through the cedar forests of Azrou and stop to hand feed the monkeys. We will continue via Ifrane,Wazzaneto Fes.

take your flight on time.